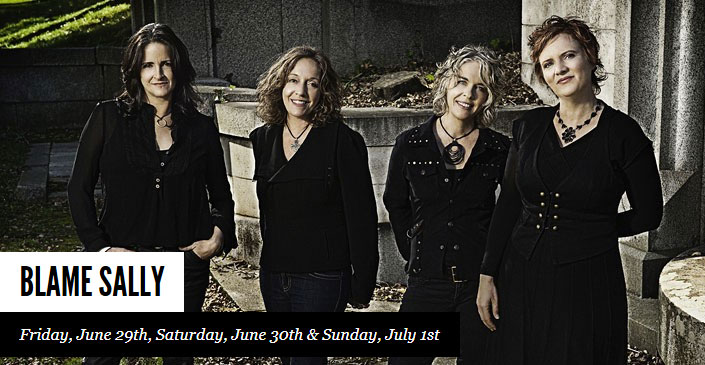 “A sensual vocal blend and their agile instrumental prowess find them earnest and assertive in terms of parlaying the material…a certain subtlety that makes their music all the more seductive.” – Blurt Magazine

“With their decade plus of live performances and recordings, Blame Sally has established a legacy of song combining country, folk, rock, Celtic and strains of classical music, which has brought originality together with a roots sensibility and pop accessibility.” – NoDepression.com

If you sense a slight incongruity in the title of Blame Sally’s Speeding Ticket and a Valentine, rest assured that it’s as purposeful as the life it describes is random. The album lifts its name from a line in the bridge of the hard-charging leadoff single, “Living Without You,” which describes a day—or maybe entire existence—that’s “sweet and sour at the same time/mink and a porcupine/ speeding ticket and a valentine.” Clearly, this is a band that knows its oxymorons.

The four women who make up the Bay area-based group have some experience with improbable complexities and contradictions. Almost everything about their history is contrary to conventional wisdom. For one thing, they put their individual careers aside to start Blame Sally when they were in their late 30s and 40s—the age at which bands are traditionally supposed to break up and begin solo careers. For another, this is obviously an all-female band—”girl groups” usually being the novel province of youthful upstarts, not mature singer/songwriters. Splitting the frontperson status among three of four members goes against the agreed-upon maxim (agreed upon by everyone but the Beatles, anyway) that every group needs a single strong focal point. And didn’t they get the memo that women in particular in show biz are supposed to be packing it in at this point, not making fresh introductions?

Actually, they did get that memo, and put it in the proverbial circular file.

“We’ve realized that some of the things that might have been considered liabilities were actually assets,” says vocalist/pianist Monica Pasqual, “and that in truth, the very thing you might be thinking you should hide or isn’t going to help you is something that people are excited about.”

“One of the things I really enjoy about being in this band is how inspired our audience is by us,” agrees vocalist/guitarist Renee Harcourt. “There’s a real openness and lovingness between the band members, and a lot of joy, and I think people get that when they watch us play. In addition to that, I think people find what we’re doing very inspirational, because it’s a time in your life when you’re thinking, ‘Am I doing what I really love to do?’ You start questioning your career choices around that time, along with a lot of things in your life. And we’ve been fortunate enough to be able to defy the odds and do what we love. People enjoy seeing that.”

“There are a lot of people who become really connected to us, and fascinated by ‘Ooh, what’s their story?’ We’ve had fanatical fans in their 40s and older, and also plenty of young girls who’ve been super into it. Just thinking that’s cool—’Wow, that could be my mom!'” she laughs.

“That’s not everything,” Pasqual points out. “If we were coming out and our music sucked, or it was not vital-sounding, I don’t think that people would be like ‘Oh, cool, they’re in their 40s,’ or whatever,” she laughs. “But they’re digging what we’re doing, and they’re seeing that it’s fresh and that it has life and originality—and then you throw in a ‘How weird…!’ on top of that. It’s like when Lucinda Williams really hit when she was in her 40s. She’d been doing it for a long time, but for a lot of people, that was the first time they really heard her, and it was like: God, she rocks, she’s cool, she’s got edge, and she doesn’t fit the stupid mold.”