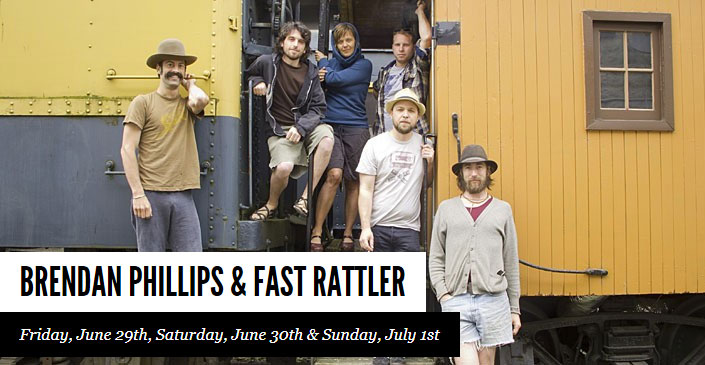 THE STORY
Portland, OR’s Fast Rattler made its debut on the 2009 Grammy-nominated album “Singing Through the Hard Times: A Tribute to Utah Phillips,” which included artists like Emmylou Harris, Ani DiFranco, Pete Seeger and Tom Paxton paying their respects at the passing of one of Folk music’s activist heroes.

Fronted by Utah’s son Brendan, Fast Rattler dug deep into Utah’s extensive catalogue, crafting their own versions of his songs and setting his poems to music. Fast Rattler’s full-length debut “Linger On: Celebrating the Songs of Utah Phillips,” was released in 2011 to wide acclaim, as they toured throughout the US and Canada, earning slots at major folk festivals including the Kate Wolf Memorial Folk Festival.

The band’s follow-up EP, “Hands on the Plow,” focuses on original material and new arrangements of traditional folk songs. While Utah’s music will always be a part of Fast Rattler’s repertoire, the band has won audiences over with their own original material and renditions of cherished classics. Most significantly, Fast Rattler has been invited to contribute an original track to the upcoming “Occupy This Album,” a compilation of songs inspired by the Occupy Wall Street movement, featuring artists from Willie Nelson and Steve Earle to Third Eye Blind and Thievery Corporation.

SOUND AND FORMAT
The members of Fast Rattler are songwriting vagabond troubadours, virtuosic instrumentalists and collectors of old songs. Distinguished by versatility and a reverence for Utah’s legacy – the ensemble easily shape shifts in order to bring the music to as many listening situations as possible.
As a six-piece ensemble…Fast Rattler weaves vocal harmonies with banjo, fiddle, guitars, and pedal steel, anchored by a rock ‘n’ roll rhythm section. They weave a musical tapestry that brings audiences to their feet and melts their hearts with stories of disaster, struggle and love lost. Blending traditional American folk, bluegrass, Irish and Gypsy music with elements of jazz, swing, and rock, their performance evidences a genre-bending, quicksilver grace that nods to forebears ranging from Pete Seeger and Dave Van Ronk to Tom Waits and Wilco.

As a 5-piece string band…Fast Rattler drops the drums and swaps the electric bass for an upright and goes acoustic. The energy and dynamism remains – whether performing with or without a PA – which allows them to play anywhere from more intimate venues to barn dances to street corners.

Brendan can perform solo or add members to accompany him (duo, trio)…here the performance focuses on the stories behind Utah’s songs. Brendan also shares original material and draws from the treasure trove of American folk classics.

In their nimble approach, Fast Rattler embodies Utah’s vision – that folk music is a river in constant flux, to be added to and taken from, but always poured back – so it can flow downstream to the next generation.

“While Fast Rattler mines the past for its explosive sound, its music is anything but a direct tribute. Phillips began playing music influenced by Nirvana, Pavement and indie punk rock and created a sound all his own. This includes everything from traditional folk and bluegrass to pangs of modern rock thrown into a sonic stew that is at once grounded in traditional folk and streamlined into intricate arrangements that appeal to fans of both traditional and current music.”- A.P. Kryza, Forest Grove News-Times

BACKGROUND
In 2006, Fast Rattler played to a capacity audience at Portland’s Aladdin Theater for the annual Winterfolk Festival. In 2007, they joined Utah at the Vancouver Folk Festival, playing the songs while Utah told the stories. After Utah passed away, Fast Rattler returned to the Vancouver Festival to perform as part of a Utah Phillips memorial.

“I had never heard Brendan sing at all. He was playing my 1935 Gibson that I had loaned him, and there he was with a full band, doing these songs I had practically forgotten…I wasn’t just a little impressed, I was knocked down at the time and attention he put into putting these songs together.” -Utah Phillips.

In 2011, Fast Rattler played at the annual Kate Wolf Memorial Music Festival along side acts like Mavis Staples, Great American Taxi, and Los Lobos. Since the release of their debut, Fast Rattler has played on stages large and small all over Oregon, Washington and California.