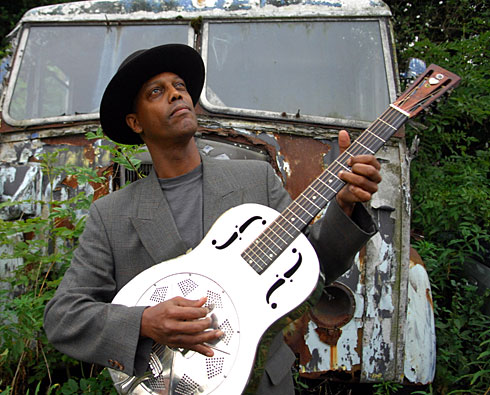 A career spanning five decades, 36 albums, countless radio & television shows and non-stop touring has made Eric Bibb one of the leading bluesmen of his generation. A Progressive preservationist, a fiery singer with true soul, gospel and folk roots, enjoyable and accessible, his blues are honest and powerful. One critic wrote: “He has all the ingredients for stardom – handsome good looks, a voice as strong and soulful as they come, the guitar chops to hold his own against the best and he writes compelling, sensitive songs. His blues are clean, beautifully sung, soulful and upbeat”. The weekly syndicated American program “House of Blues Radio Hour” host Elwood Blues (a.k.a. Dan Aykroyd) once declared to Eric: “You are what the blues in the new century should be about.”

“In the ‘60’s, Taj Mahal took on the mission of making acoustic blues a locus of black pride”, wrote the Village Voice writer Robert Christgau, “at a time when they seemed corny, country, backwards, and even Tom to the vast majority of young black musicians and almost all young black listeners. For decades no black musician of consequence followed the trail he’d cut”.
But in the ‘90’s, Keb’ Mo’, Guy Davis, Corey Harris and Eric Bibb came into their own, to prove Taj Mahal a prophet.
Born in New York City, Eric is the son of Leon Bibb, a senior figure on the New York folk scene of the 1960’s. Eric’s godfather was actor/singer and activist Paul Robeson and his uncle was the composer and jazz pianist John Lewis, founder the Modern Jazz Quartet His parents’ house was a center of artistic life where “getting to meet Rev. Gary Davis, Dylan, Judy Collins or Odetta had a profound effect on me”, reminisces Eric.

Aged 19, he left for Paris, where a meeting with American guitarist Mickey Baker focused his interest in blues guitar. A few years later he moved to Sweden and settled in Stockholm, where he found a creative environment that, oddly enough, reminded him of his teenage days in Greenwich Village. He made a handful of albums, starting in 1972, and began meeting and playing with local musicians, as well as other American expatriates. His breakthrough album, “Spirit & The Blues”, was released in 1994 and led to that modern wandering songster/troubadour embarking on tours of the UK, the United States, Canada, France, Sweden and Germany and contracts with new labels.

Over the course of many years, Eric has managed to gather a faithful and multinational “tribe” of musicians with whom he has recorded and performed with on stage. The list includes Such luminaries as his idol, Taj Mahal, Pops and Mavis Staples, Charlie Musselwhite, Guy Davis, Hubert Sumlin, Rory Block, Maria Muldaur, Bonnie Raitt, Mamadou Diabate, Toumani Diabate, Djelimady Tounkara, Amar Sundy, Glen Scott, Staffan Astner, Chuck and Darick Campbell, Dirk Powell, Solo Cissokho, Cedric Watson, Larry Crockett, Andre De Lange, Jerry Douglas and Habib Koite, who Eric has toured with extensively during most of 2012 and 2013.

Eric has this to say about his new album: “Jericho Road is related to a record like Marvin Gaye’s “What’s Goin’ On” It was produced by my friend, multi-instrumentalist Glen Scott, who produced some of my earlier work – A Ship Called Love, Diamond Days and Spirit I Am. Musically, we decided we were just going to follow our hearts. It’s an album that combines all of our pet sounds: classic soul, gospel, world music flavours and some strings, as well. It’s more adventurous than ever before” – and it propels the blues into this new century.