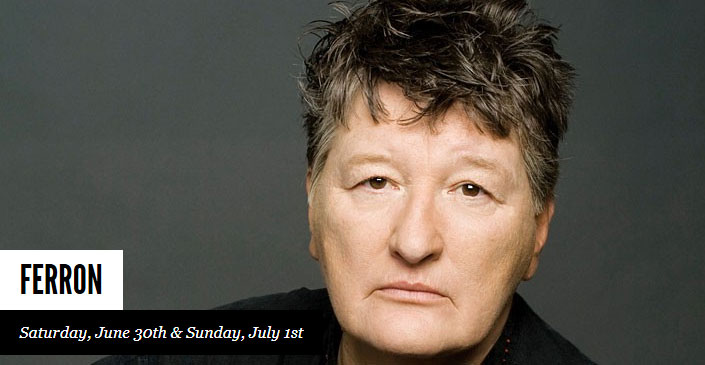 “Ferron writes of love with the relentless introspection of Leonard Cohen, and, as with classic Bob Dylan, her songs’ tough, questioning attitude sometimes gives way to an unexpected.” – Rolling Stone Magazine

When Canadian singer-songwriter Ferron was 15, she hit the road alone. She had a single shopping bag with a change of clothes, a toothbrush, a waitress uniform, and a Leonard Cohen LP. Little did she know then, but one day her own songs would be compared to Cohen’s for their depth of word-craft, intimacy, and wisdom. (NPR)

“Ferron is no diva. She is a real salt of the earth singer who approaches her art with both sleeves rolled up, ready to dive in. She walks her talk with heart exposed and performs with a courage and commitment that few other artists ever muster. The songs don’t sound composed and sung as much as they feel wrung from the sweat and toil of hard fought experience. In Ferron’s world, the contents of her songs appear as if they’re lived out on the canvas of her life and not just inside the confines of her art.

Ferron illuminates human experience in a way that few artists are capable of. Like fellow Canadian Leonard Cohen, Ferron has such self-possession and intuitive command of her material that she can deliver lines that a less experienced singer would never be able to pull off. The weight, poise and gravity that she communicates with each word, each carefully annunciated phrase, is something to marvel at. The words she sings sound ancient, irrefutable and significant.” (from Restless and Real)

In 2009 the long awaited documentary, “Ferron: Girl on a Road” will be screened worldwide at film festivals and on television. Ferron will also release a soundtrack of songs from the film.