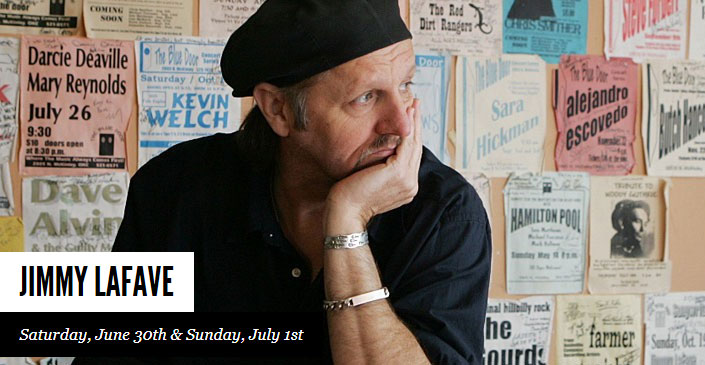 “This is what Americana is supposed to be: real, rooted, and uncompromising.” – Acoustic Guitar

Jimmy LaFave was born in Wills Point, Texas, a small town 30 miles east of Dallas. Although he has lived in Austin for over 20 years, many people think of him as being from Oklahoma, because of his strong musical ties to the state and what he often refers to as its “red dirt music.” It was in this landscape that he began to define his sound and soak up a combination of his experiences among authentic songwriters from the tradition of Woody Guthrie. Before leaving Oklahoma for Austin, Jimmy did some independent recording and toured the southwest with the first version of his band Night Tribe.

He moved to Austin in 1986, where he continued to write songs and to develop his musical ideas. Shortly after arriving he was asked to help launch the songwriter nights at the new performance venue Chicago House. In 1988 he recorded his self–produced tape, Highway Angels…Full Moon Rain, which won the Austin Chronicle Reader’s Poll Tape of the Year Award. This led to a recording contract with a small independent label and allowed LaFave the opportunity to work with Bob Johnston, producer of several of LaFave’s favorite albums including Bob Dylan’s Blonde on Blonde and Nashville Skyline. Although these recordings were never released, by 1990 LaFave had put together an Austin version of Night Tribe and had become, according to the Austin American–Statesman, “a perennial presence upon the Austin music scene.” In 1992 Jimmy released a self–produced CD, Austin Skyline, which drew international attention to his songwriting and vocal talents, and led to a publishing agreement with Polygram Music. Due to his growing popularity and radio play on more than 200 stations, Austin Skyline and its label, Bohemia Beat, received national distribution through the Rounder Record Group. His second album, Highway Trance was released in 1994 followed by his third CD, Buffalo Return to the Plains, in 1995.

The grass roots demand and critical acclaim for Jimmy’s music, which led to extensive touring in the United States and Europe, was recognized in 1996 when he was asked to tape a performance for the PBS musical series Austin City Limits, and was invited by Nora Guthrie to appear in Cleveland at the Rock and Roll Hall of Fame tribute to Woody Guthrie. That same year LaFave won his second consecutive Austin Music Award for Best Singer–Songwriter. His fourth CD, Road Novel, which was released in early 1997, received many glowing reviews. That year he was asked by Nora Guthrie to speak and perform at the induction of Woody Guthrie into the Oklahoma Hall of Fame. He traveled to Europe twice that year and also toured the USA and Canada.

LaFave kicked off 1999 with the release of the CD entitled Trail, a 15 year retrospective of bootleg tapes, live performances, radio shows and studio out takes. The double CD contains 31 tracks recorded in Texas and around the world. Including 12 Dylan songs, it answered the demand of fans for a ‘LaFave does Dylan’ CD. In the liner notes Dave Marsh noted: “Jimmy LaFave has one of America’s greatest voices, and this album is the story of what he has learned to do with it. It’s a unique instrument, with startling range and its own peculiar sense of gravity, liable to swoop in and wreck your expectations at any instant.”

In 2001 Jimmy released Texoma. The CD received some of the best press of his career. including reviews by the Associated Press,VH–1, Billboard and Playboy. The ballad “Never Is A Moment” from the album, a radio favorite, became his most requested song ever. That year when not playing his own musical dates, Jimmy toured with a Woody Guthrie tribute project he conceived entitled Ribbon Of Highway–Endless Skyway. The show features a rotating cast of notable musicians performing Woody’s songs interspersed with narrations from his many writings. He also appeared that year at the annual Woody Guthrie Folk Festival. Jimmy serves on the Advisory Board for the festival, and has played it twelve straight years. He is always quick to acknowledge it as his favorite musical event.

In 2005 Jimmy signed with the indie label Red House Records, and released Blue Nightfall. This stunningly soulful album was LaFave’s first in 4 years, and once again received many favorable reviews. In April, Jimmy was then honored when one of his musical heroes Bruce Springsteen invited him on stage for a duet at his show at the Nokia Arena in Dallas. Also that month Jimmy was very grateful when Nora Guthrie allowed him to look through the unseen lyrics from the Woody Guthrie Archives. She helped Jimmy choose 19 songs for a future “Woody” CD project, where he will co–write music for the lyrics using his own style and interpretations.

In 2010 Music Road released “Favorite’s” a CD compilation of sixteen of Jimmy’s most requested songs, and he is currently putting the finishing touches on a new release for Music Road due out Spring of 2011.