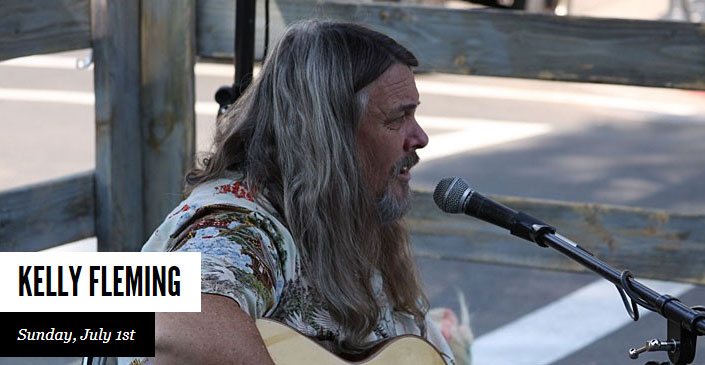 By Tom Durkin
For the Nevada City Advocate

If you hum a few bars, Kelly Fleming can probably fake it. A natural-born, self-taught musician, Fleming is a regular at the few remaining “listening” (as opposed to dancing) bars and restaurants left in the area.

“I’m into lots of different styles of music,” says Fleming, a longtime Nevada City resident and fixture in the local music scene.

This gives him a huge lifetime repertoire to draw from – and a generous donation to his tip jar is always an inspiration.

When he’s playing his favorite venue, “the fishbowl” (aka Friar Tuck’s bar and restaurant), Fleming sees himself not only as an entertainer but also as a goodwill ambassador for Nevada City.

“I always try to engage people,” he says.

Fleming’s gregarious nature, friendly eyes and devotion to his music makes him a popular performer at Friar Tuck’s, where customers can practically sit in his lap while enjoying their drinks and food.

He says he always makes a point of asking people where they’re from and making them feel welcome. After all, he wants them to come back, he says.  “I’m proud of our little town.”

In addition to playing Friar Tucks in downtown Nevada City, Fleming frequently plays at Matteo’s Public, the Five-Mile House and the Holbrooke Hotel in Grass Valley, another venue where he gets up close and personal with his audience.

His broad musical range and outgoing personality makes him a natural choice for private parties.

Primarily a solo performer, Fleming has nevertheless played with many other local bands and musicians, including ex-roommates Paul Emery and Peter Wilson. They shared space at Bennett House Records, which served as both as their home and recording studio in the 1980s.

And just to keep things interesting, he also volunteers to teach and play at New Folsom Prison. One inmate, Markus Tatum, wrote to the Nevada City Advocate, calling Fleming a “stellar hero” who brings “a large twist of his humor” to the men inside.

Tatum reported Fleming has recorded a couple tracks on two of the prisoners’ soon-to-be-released CDs, “The Road” and “The Prison Blues Band.”

Fleming is working on the final mixes with Emery, who recorded the sessions.

He’s recorded two CDs of his own, but they’re both out of print. He says he’s planning on recording a third CD of original material.

He admits, however, “I’m not very industrious about selling.”

He’d rather play and teach music.

His instrument of choice is the guitar, and his handmade guitar by the late Lance McCollum of Colfax is his most prized instrument. He also plays banjo, mandolin, bass and keeps a keyboard around to teach music theory.

Fleming loves teaching almost as much as he loves playing.

“There’s nothing better than winding up young musicians and sending them out in the world,” he says.

Supporting his students and fellow musicians is a core component of Fleming’s being, and he is quite happy to work behind the scenes. In fact, one of the highlights of his year is stage-managing the annual Kate Wolf Memorial Festival in Laytonville.

Still, his first love is playing music, and he laments last year’s loss of two prime venues, the Posh Nosh and the Chief Crazy Horse Saloon.

On the bright side, he welcomes the recent opening of Homer Wills’ Tin House Studio in Grass Valley, which showcases local and national artists in an intimate, down-home “house-concert” setting.

Over the years, Fleming has seen many performance venues come and go, and right now, he and his fellow musicians are feeling the loss. “We’re very protective of our venues, and we hate to see them go.”

Nevertheless, Fleming isn’t going anywhere. Although he was born and raised in Southern California and spent seven years in Cleveland, Fleming is thoroughly ensconced in this community: “This is my home.”

“I’m at a point in my life where I’m not really concerned about being famous,” he concludes philosophically. “I just love to teach. I love to play.”