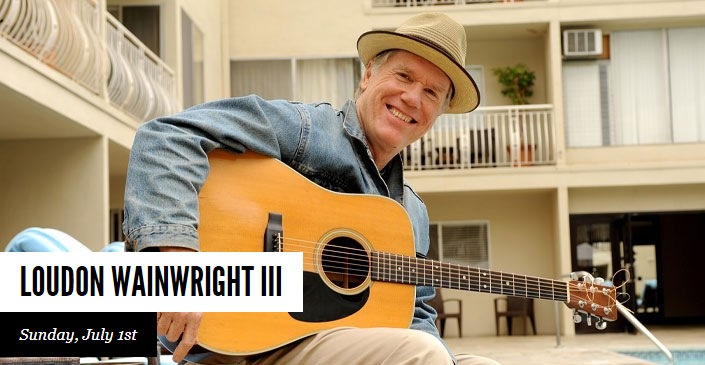 “Mr. Wainwright has proved to be far and away the most candid diarist among the singer-songwriters who… brought confessional poetry into popular song… Mr. Wainwright wrings more human truth out of his contradiction than any other songwriter of his generation.” – New York Times, Stephen Holden

High Wide & Handsome named among the year’s best per Village Voice, No Depression, FolkWax and fRoots

Loudon Wainwright III was born in Chapel Hill, NC in 1946. His father was Loudon Wainwright Jr., a columnist and senior editor for LIFE Magazine and his mother was a housewife/yoga teacher, Martha Taylor. He studied acting at Carnegie-Mellon University but dropped out to partake in the Summer of Love in San Francisco.

Loudon wrote his first song in 1968, “Edgar”, about a Watch Hill, RI lobsterman, and was soon signed to Atlantic Records by Nesuhi Ertegun. Several years later, Clive Davis lured him to Columbia Records, where 1972’s “Album III” yielded the top 20 hit “Dead Skunk”. His recording career spans a total of 23 albums, including 2009’s Grammy-winning “High Wide & Handsome”, a musical tribute to Charlie Poole (1893-1931), the legendary, yet obscure NC singer and banjo player. (Awarded ‘Album of the Year’ status by Entertainment Weekly editor and NPR contributor Ken Tucker.) Wainwright has collaborated with songwriter /producer Joe Henry on the music for Judd Apatow’s hit movie “Knocked Up”, written music for the British theatrical adaptation of the Carl Hiaasen novel “Lucky You”, and composed topical songs for NPR’s “Morning Edition “, “All Things Considered” and ABC’s “Nightline”. Loudon Wainwright songs have been recorded by Johnny Cash, Earl Scruggs, Rufus Wainwright, and Mose Allison, among others.