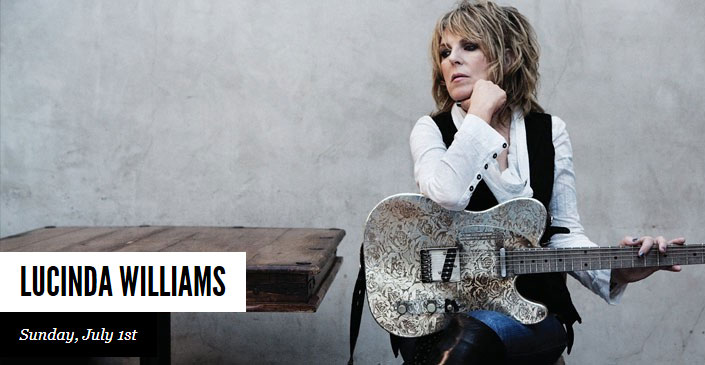 “One of the sharpest. Most uncompromising singer-songwriters of any gender…” – Rolling Stone

It’s long been said that the blues — in all its forms — is one of the most potent means to transform pain into beauty. Lucinda Williams has known that since she began devouring music as a youngster growing up in Louisiana, and she’s been finding new ways to perform that alchemical reaction ever since.

LUCINDA has been writing since the age of 6, playing guitar since she was 12 and has been performing for the last 37 years. It’s fair to say she has perfected the art of creating intriguing, gritty lyrics to match her distinctive, haunting voice during this time. Blessed is no exception. This alt-country songstress had Elvis Costello among the guest musicians featured on her latest album, playing some scorching electric guitar that only further offset the strength of her spine-tingling voice.

Born in Louisiana of a poet and a pianist, LUCINDA WILLIAMS won the first of her 3 Grammy Awards in 1988 for her single Passionate Kisses from the album LUCINDA WILLIAMS. Following which came a long pause punctuated by one album and various guest appearances, until ten years on in 1998 she hit the road running with Car Wheels On a Gravel Road which not only went gold but won another Grammy Award for Best Contemporary Folk Album. Three years on, in 2001, she earned her third Grammy Award, this time for Best Female Rock Performance for the single Get Right With God, an up-tempo gospel rock song from an otherwise low-key ESSENCE.

With this catalogue of gorgeous albums and truly-unique songs, we are the Blessed ones to feature LUCINDA WILLIAM’S sultry songs in this year’s festival.