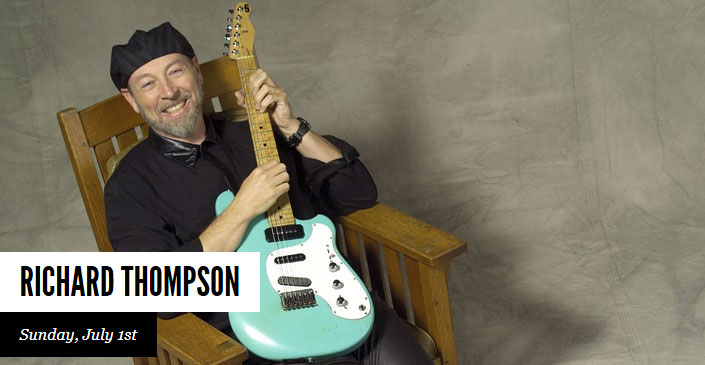 In 2010 Thompson was appointed Artistic Director of London’s prestigious Meltdown Festival at South Bank Centre, received the Mojo Les Paul Award, and for his service to music – was named on the Queen’s 2011 New Year Honours List as an Officer of the Order of the British Empire (OBE).

“From his early days in Fairport Convention to his imperious solo career, he is dexterous beyond measure and as tasteful as high tea at the Ritz.” – BBC America

“The raging speed of Hendrix and Prince, the fluidity of Clapton and Page, and the lacerating lyrics of Young and Dylan rocket Richard Thompson toward the top of any axe-slingers’ list. ” – ELLNORA | The Guitar Festival

“In the guitar god firmament, Thompson easily takes a place beside Eric Clapton and Jimmy Page. He has certainly been the most consistently imaginative English plank spanker of modern times.” – Daily Mirror

“Only heavyweights like Neil Young and Prince are in Thompson’s league when it comes to combined prowess as a writer and a guitar player.” – The Philadelphia Inquirer

“Richard Thompson has been called the finest rock songwriter after Bob Dylan and the best electric guitarist since Jimi Hendrix.” – L.A. Times

“For my money, Richard Thompson is one of the finest artists to ever grace the music scene, a terrific songwriter and exceptional guitarist who remains severely overlooked.” – Citybeat

“Boasting a guitar tone as recognizable as Dylan’s voice, the legend fuels his six-string histrionics with a dying-light rage…” – SPIN

“The OBE will further restore Richard Thompson’s status at the top table of British musical heroes as a folk revolutionary, one of the world’s greatest guitarists, a must-see performer and one of the finest songwriters this country has ever produced.” – Spectator