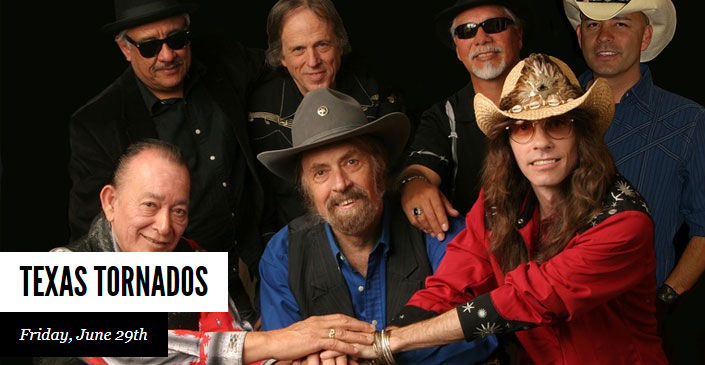 The ultimate Tex-Mex supergroup, is BACK! The Texas Tornados with their infectious, party-ready sound, blending early rock & roll, Mexican folk music, R&B, blues, and whatever other roots music crosses their paths are back and hitting the road for 2011! The Texas Tornados, first assembled in 1989, were composed of some of the genre’s most legendary figures: Doug Sahm, Augie Meyers (Sahm’s bandmate in the groundbreaking Sir Douglas Quintet), Hispanic country star Freddy Fender, and accordion virtuoso Flaco Jimenez. Their self-titled debut album was released on Reprise in 1990 — in both English and Spanish versions — to rapturous reviews and hit number 25 on the country charts. The group toured extensively behind it and issued the Grammy-nominated follow-up album Zone of Our Own in 1991. The remaining members of the Tornados teamed up with Doug Sahm’s son Shawn Sahm for a tribute of sorts at the Austin SXSW. The response was so overwhelming that the Tornados wanted to share this Tex-Mex party with all. Look for Flaco Jimenez, Augie Meyers and Shawn Sahm as well as orginal Tornado members Louie Ortega and Speedy Spark, Ernie Durawa to take everyone on a Tex-Mex trip with all their favorite Tornado hits as well as your favorite songs by Sir Douglas Quintet – Freddy Fender in loving memory. This will be one big Tex-Mex party not to be missed!