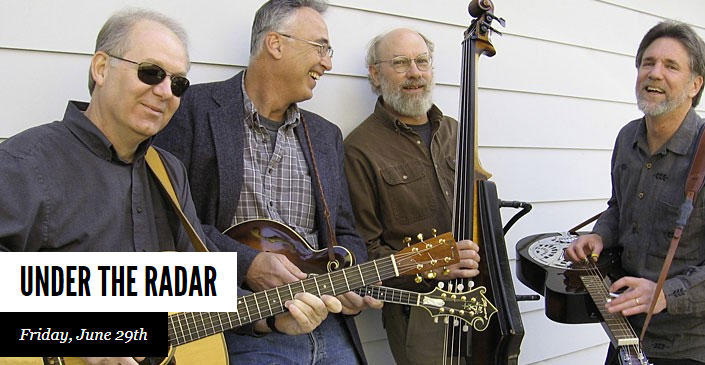 Under the Radar is a four piece acoustic band that plays the edge of new acoustic music. This is music rooted in traditional bluegrass but with a modern sensibility. Using the traditional bluegrass instrumentation of mandolin, dobro, guitar, string bass and 5-string banjo these folks are as likely to do an Irving Berlin swing song from the 40’s, or an old Ray Charles R&B tune , as a hard driving Bill Monroe bluegrass song, or that classic Jimmie Rogers country song. They’ve even been known to sneak in the occasional bluegrassified Beatles song! And when was the last time you heard a bluegrass reggae version of “Sitting Here in Limbo”? In addition to creating lively new versions of old songs, UtR also features crisp engaging original compositions.

With musical ties going back many years these folks have been around and played a lot of music together. Consequently their two and three part harmonies leave you wondering if they grew up in the same family singing together! Their relaxed on-stage banter will leave you laughing and their adept musical genre-hopping will leave you smiling, dancing or singing along.